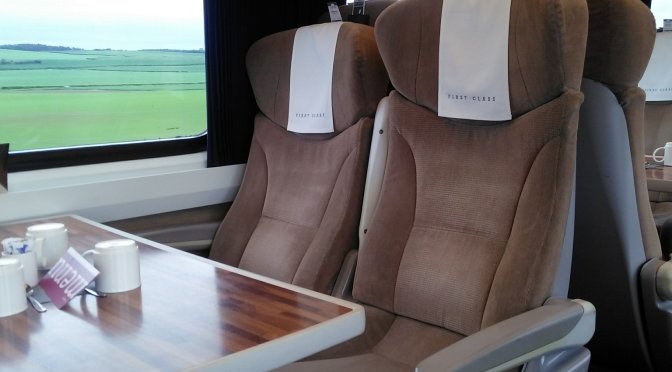 I may have mentioned before how much I don’t like Virgin Trains. This morning came the terrible news that they (and Stagecoach) have been awarded the East Coast franchise. I am despondent about my chances of ever getting out of Scotland by rail again now that they have a monopoly. I have worked out a tentative alternative route by coach to Newcastle, ferry to Amsterdam and train and Eurostar from there to London, which in some cases may turn out to be quicker than waiting for a Virgin Train. There may also be a possible emergency backup route by Cairnryan with ferry to Belfast, train to Dublin and ferry to somewhere in Wales, but that does seem a bit far-fetched even by my standards.

I suppose I should try to explain my aversion to Virgin Trains. This is the result of a few really bad experiences of using them, ranging from relatively minor things like being trapped in an overheated coach on a hot day and being harangued by a Virgin employee about joining a Harry Potter reading group, to the train not turning up at all.

I can’t really decide which was the worst of these two cases of train not turning up (votes on a postcard). On the first occasion my son and I were heading from Edinburgh to Charmouth in Dorset. The train was supposed to take us from Edinburgh to (I think) Axminster. However when we got to Waverley station the train had been cancelled. A hapless Virgin employee got all the passengers to board a different train but that one only took us as far as Carstairs. Anyone who has travelled to Edinburgh from Birmingham, Wales etc will know it as the station next to the state mental hospital, where the trains always stop for a while, especially if it’s dark, when the image of escaped murderers surrounding and boarding the train usually pops into my mind. Our train then left with the Virgin employee calling to us cheerily out of the window, ‘Just get on the next train that comes along.’ There was nothing else to do but follow his instructions, unless we really wanted to spend the rest of the day on the platform at Carstairs. Instead we spent the rest of the day travelling through the country in several stages, occasionally getting advice on where to head for next but more often making it up as we went along. We ended up in an exhausted state at our caravan in Charmouth some time later, more by luck than judgement after a journey that used four trains, a taxi and a camper van belonging to a complete stranger whose sister we met on one of the four trains.

After that we tried to avoid Virgin Trains for a while. However the day came when we gave them another chance. This time we were ‘only’ heading for Crewe, which I naively thought would be an easy place to get to by train from almost anywhere. Once again the Virgin train was cancelled. This time the company helpfully laid on a coach to take us from Edinburgh to Carlisle, where we arrived soon after the last train to Crewe had departed. We boarded the only remaining train going south that day, which was for Wigan. At around midnight we found ourselves in a taxi haring along the M6 from Wigan to Crewe in a thunderstorm. I felt so lucky actually to arrive at Crewe in one piece that it seemed almost unfair to complain that the journey had taken approximately 7 hours instead of the 3 hours it was meant to take.

To add insult to injury, Eurostar, who were also apparently in the running to take over the East Coast route, today sent me a picture of their new style trains with free wi-fi throughout, bigger seats and overall loveliness. If only…

It’s too sunny to make a start on my grim post-apocalyptic dystopian novel and the breakfast hasn’t come round yet, but I have all my gadgets ready for the journey.

The purple thing is my netbook for writing on, the book with the flowers is my grim post-etc notebook. You can’t see my kindle fire because I used it to take the picture, but it’s the most useful travel gadget because it’s so versatile. I have a playlist of travel tunes on it – a random selection ranging from Big Yellow Taxi through Pasadena and Graceland to Leaving on a Jet Plane. Some of the travel connections are more tenuous than others.

Journeys through Europe and beyond